Unique and Enlightening Facts About the Thomas Jefferson Memorial

Thomas Jefferson will always be remembered as one of the most important figures in American history. After all, the man was the principal author of the Declaration of Independence, an American Founding Father, and the third President of the country. It was actually President Franklin D. Roosevelt who believed that Jefferson deserved his own monument, and construction of the magnificent building was completed in six years. 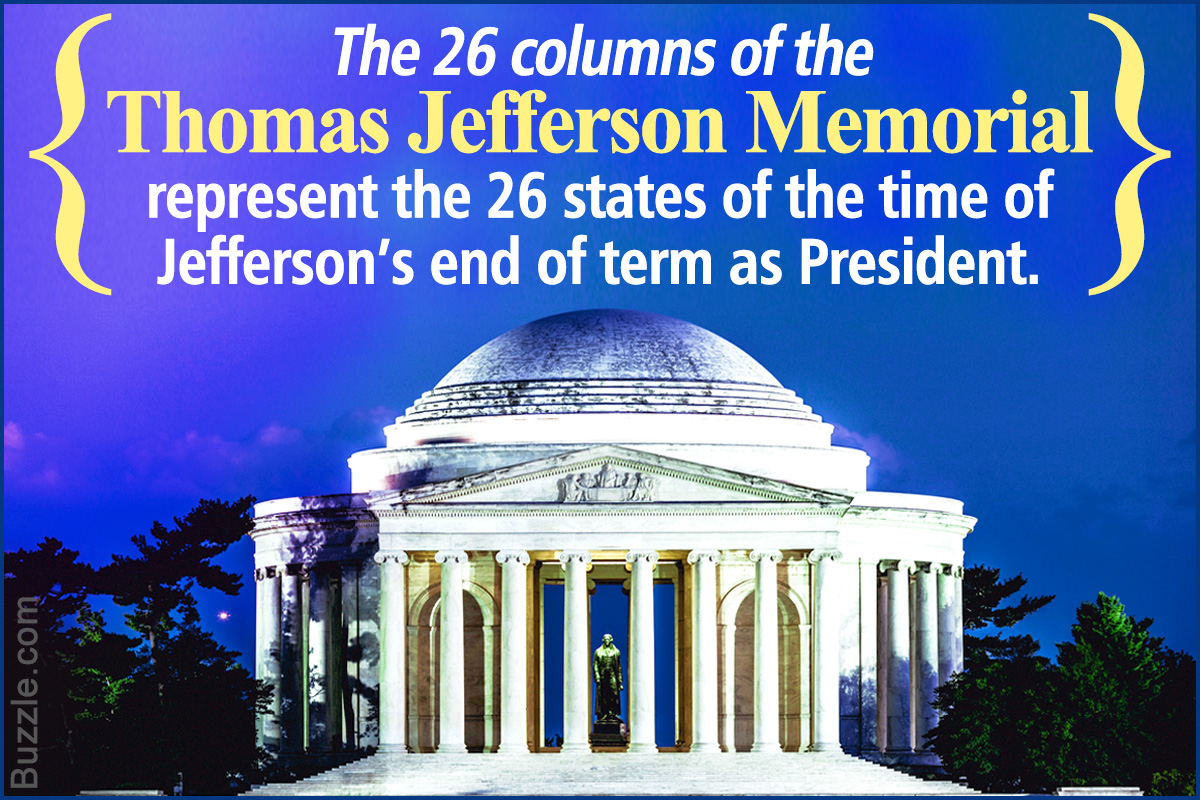 Thomas Jefferson will always be remembered as one of the most important figures in American history. After all, the man was the principal author of the Declaration of Independence, an American Founding Father, and the third President of the country. It was actually President Franklin D. Roosevelt who believed that Jefferson deserved his own monument, and construction of the magnificent building was completed in six years.

Our greatest happiness does not depend on the condition of life in which chance has placed us, but is always the result of a good conscience, good health, occupation, and freedom in all just pursuits. Thomas Jefferson

Born on April 13th 1743, Thomas Jefferson was a brilliant architect, musician, diplomat, and scientist who wanted equal rights for all. He was one of the most enlightened men of the 18th century, and believed in a government that stood for people. Jefferson was born in an affluent family, and thanks to the prosperity of his father, had an excellent education. He chose law as a profession, and soon became one of the best legal minds of the nation. Before becoming the President he held many important positions in American politics, and is considered the pioneer of the concept of a clean and frugal government.

If it wasn’t for President Franklin D. Roosevelt, there would be no Jefferson memorial. Roosevelt was an admirer of Jefferson, and believed that like Lincoln and other great leaders, even Jefferson deserved his own monument. Roosevelt inquired about the possibility of including the memorial in the Federal Triangle Project, and this idea was given a green light in 1934. 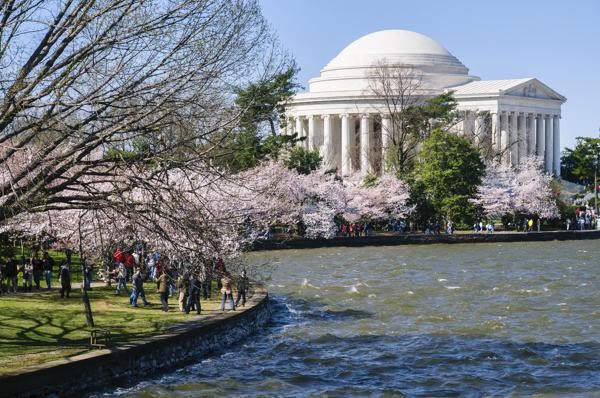 The present site of the memorial was originally a popular bathing beach for Washingtonians and other locals, and the government had also planned to construct a memorial to honor the nation’s illustrious men. However, no action was ever taken by the Congress on this issue.

The memorial is located on the south side of the Tidal Basin. The site is surrounded by cherry trees, which were a gift from Japan in 1912. Initially, the plan for the memorial generated a lot of concern among the locals, as they believed that the construction would require cutting down the cherry trees. This concern received national coverage in 1938, when a group of indignant women chained themselves together to protest against President Roosevelt. 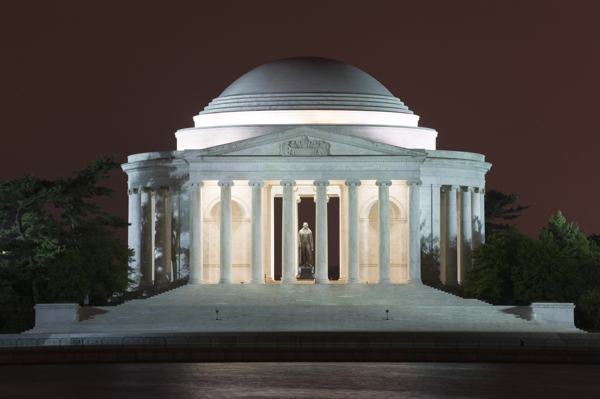 In 1934, President Roosevelt proposed a plan to the Commission of Fine Arts, to erect a memorial in honor of Thomas Jefferson.

A commission was formed in 1934 to choose an appropriate location and design for the Jefferson memorial. In 1936, John Russell Pope was selected as the designer, and he chose a neo-classical dome with a portico based on the Pantheon in Rome. The design was selected keeping in mind Jefferson’s love for classical architecture. 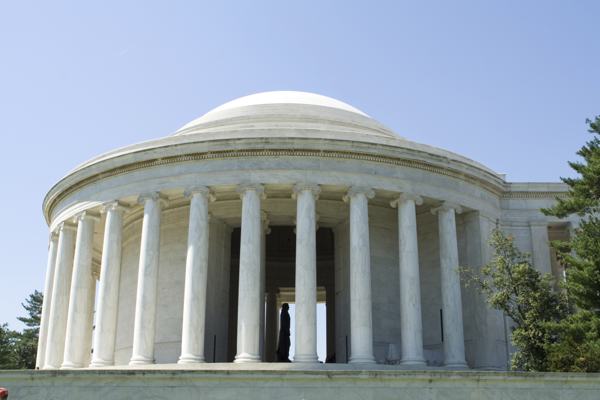 The Commission of Fine Arts was not supportive of the Pantheon design because they thought that it would directly compete with the Lincoln Memorial. However, Roosevelt loved the design, and it was finally accepted in 1936.

The construction of this magnificent structure was plagued with hindrances. In addition to the protest, the unfortunate death of architect Russell Pope stalled the project for a while. Ultimately architects Daniel Paul Higgins and Otto Reinhold Eggers took over the construction in 1937. 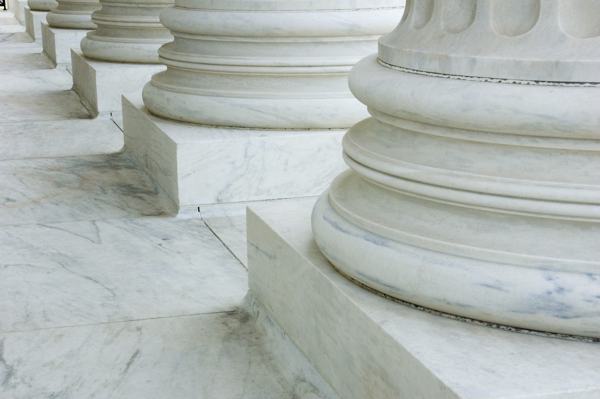 The memorial was officially dedicated in 1943 on the 200th anniversary of Jefferson’s birthday, and the total cost was more than $3 million. The distance to the top of the dome is over 129 feet, while the thickness is 4 feet. The memorial weighs 32,000 tons. 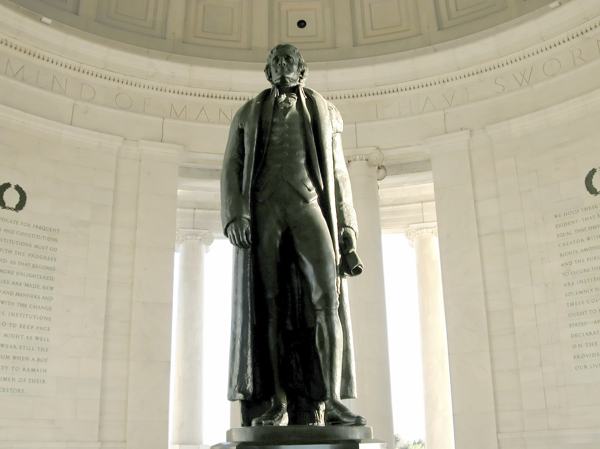 The statue of Thomas Jefferson inside the memorial was created by Rudolph Evans. It stands 19 feet tall and weighs 10,000 pounds. The statue has been placed in a way so that it directly looks at the White House, representing the Age of Enlightenment and Jefferson as a philosopher and statesman.

Initially the 19-foot Jefferson statue was made of plaster, due to the shortage of metal during World War II. The present bronze statue was installed in 1947 by the Roman Bronze Company of New York. 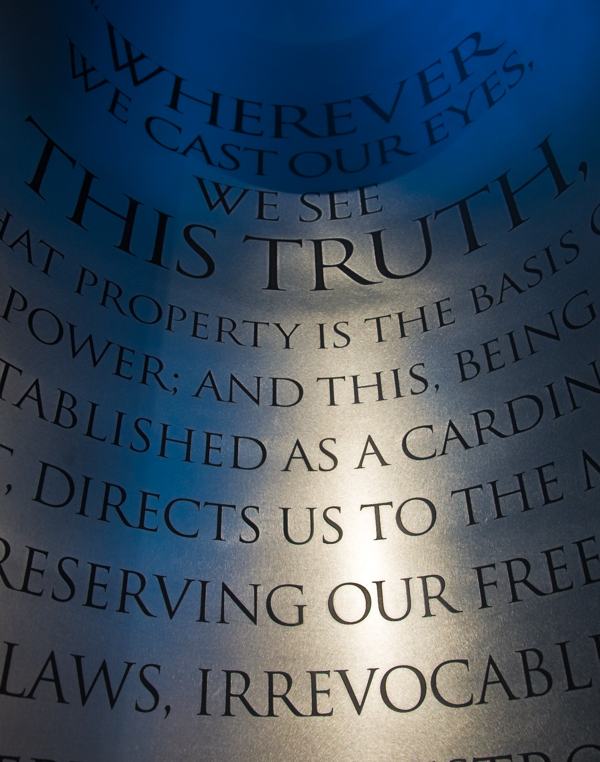 The inside of the memorial has five great quotations from Jefferson himself, which describe the great principles through which he lived by.

The Thomas Jefferson memorial is one of the most visited sites in Washington, D.C. The monument is open 24 hours and admission is free. For people who want to know more details surrounding Jefferson and the memorial can visit between 9:30 am to 11:30 am. because that is when Rangers are on duty to answer questions. 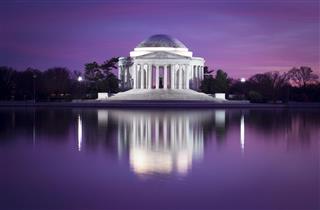 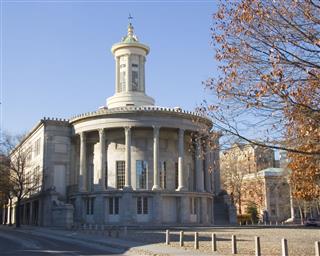 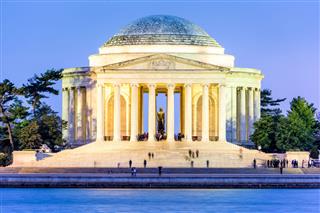