The Symbolism of the Inscription on the Statue of Liberty

The Statue of Liberty inscription, the torch held in Lady Liberty's hands, the crown with seven spikes and the position of the feet, etc. all symbolize some profound thought or the other. Statue of Liberty is a symbol of America's freedom from slavery. The more you learn about Lady Liberty the more you admire her. No wonder she is referred to as the pride of America! 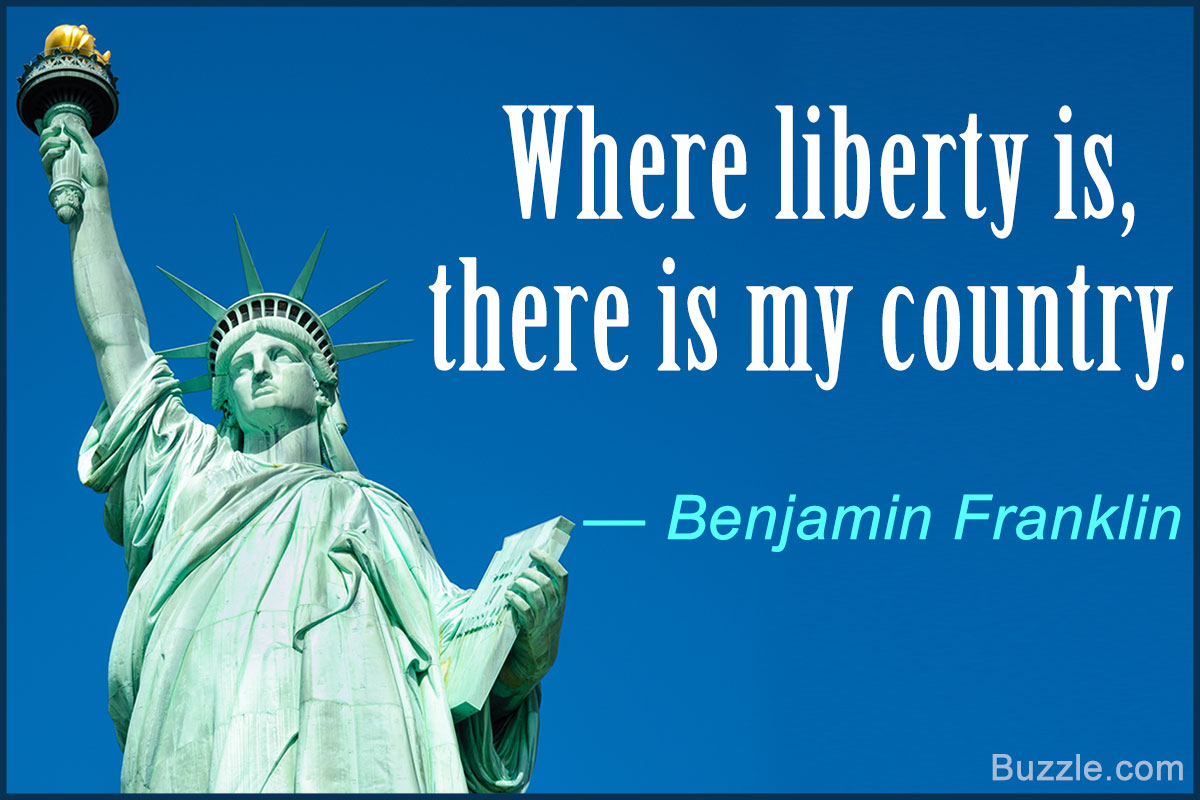 The Statue of Liberty inscription, the torch held in Lady Liberty’s hands, the crown with seven spikes and the position of the feet, etc. all symbolize some profound thought or the other. Statue of Liberty is a symbol of America’s freedom from slavery. The more you learn about Lady Liberty the more you admire her. No wonder she is referred to as the pride of America! 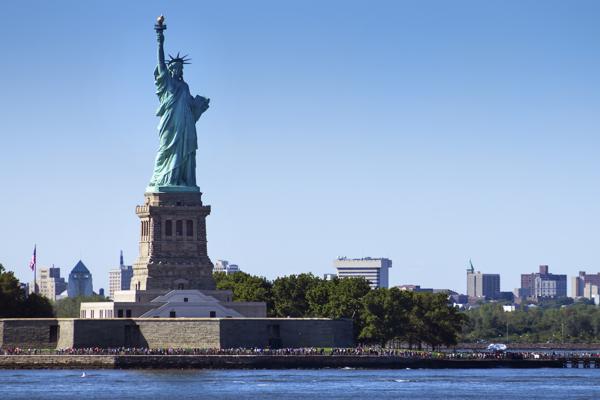 One of the iconic monuments of the United States is the magnificent Statue of Liberty. Located on the 12-acre Liberty island, in New York; near Ellis Island, this monument is a universal symbol of freedom and democracy.

The statue was presented by the French to the Americans on July 4, 1884, to commemorate 100 years of America’s Independence. It was dedicated in 1886, and then designated as a national monument on October, 15, 1924. 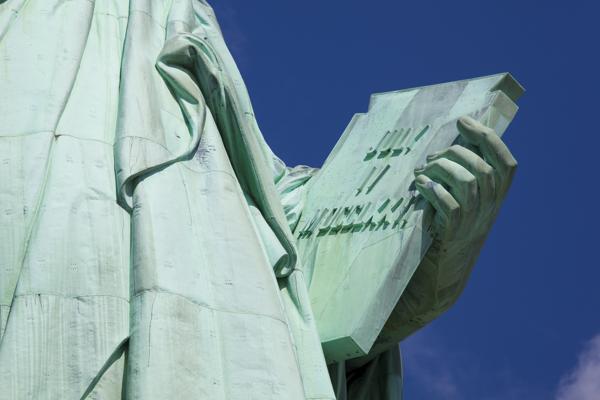 Measuring 23′ 7″ tall and 13′ 7″ wide, the tablet is held in Lady Liberty’s left hand. It displays an inscription, which is the date of United States Declaration of Independence, July 4, 1776. The inscription on the Statue of Liberty comprises a series of letters, along with a few numbers written in Roman numerals.

The inscription actually denotes the day the United States adopted the Declaration of Independence. As on the tablet, the inscription goes like this: JULY IV MDCCLXXVI
This means July 4, 1776. This is the only inscription found on the Statue of Liberty.

The Interpretation Of The Tablet

People with this school of thought say that a nation can never progress successfully without acknowledging its history. So, students of the nation should delve into history and use lessons from the past to create the future. The inscription on the Statue of Liberty will always remind children of their nation’s past. The justification sounds fair enough! Kids should have a look at the history of the Statue of Liberty.

The other school of thought is that the Statue of Liberty tablet symbolizes a book, that is power of knowledge. So by holding the book, Lady Liberty is reminding Americans the importance of knowledge and how crucial it is for a nation to fill the hearts of its people with knowledge, so as to edify the moral state of all citizens residing in the American nation.

The third possible interpretation is that the tablet along with the torch, stands as a symbol of enlightenment. Just like how the torch symbolizes light and leads to enlightenment, the book also in an indirect manner symbolizes enlightenment by providing the power of knowledge.

Inscription Inside the Pedestal

America did not have the funds to build a pedestal, to mount the Statue of Liberty. One of their fundraising ideas was to ask the poet, Emma Lazarus to write a poem for Lady Liberty. She wrote a sonnet, ‘New Colossus’.

“Not like the brazen giant of Greek fame,
With conquering limbs astride from land to land;
Here at our sea-washed, sunset gates shall stand
A mighty woman with a torch, whose flame
Is the imprisoned lightning, and her name
Mother of Exiles. From her beacon-hand
Glows world-wide welcome; her mild eyes command
The air-bridged harbor that twin cities frame.
“Keep, ancient lands, your storied pomp!” cries she
With silent lips. “Give me your tired, your poor,
Your huddled masses yearning to breathe free,
The wretched refuse of your teeming shore.
Send these, the homeless, tempest-tossed to me,
I lift my lamp beside the golden door!”

The sonnet was inscribed on a bronze plaque and displayed inside the pedestal. However, after renovation, the plaque was moved to the Statue of Liberty museum, at the base of the pedestal. Though there are several quotes associated with the Statue of Liberty, the most popular one is “Give me your tired, your poor, your huddled masses yearning to breathe free”, from the sonnet.

Since the ‘New Colossus’ poem was inscribed on a plaque, and then mounted inside the pedestal, it cannot be called an inscription. Thus, the only inscription found on the Statue of Liberty is that of JULY IV MDCCLXXVI, inscribed on the law-book.

The Statue of Liberty 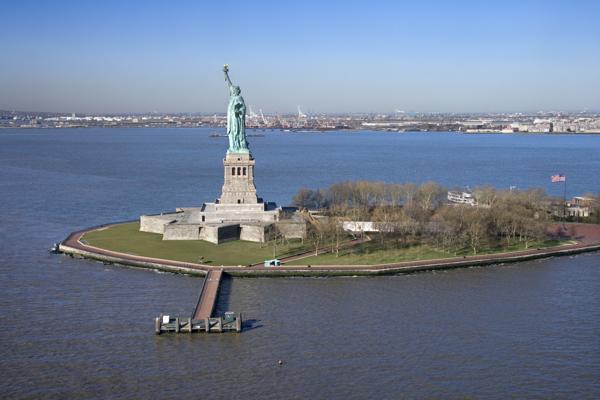 Officially known as ‘Liberty Enlightening the World’, Lady Liberty is made from 300 copper sheets, which are suspended from a steel framework. These copper sheets have naturally oxidized over the years, to form a patina-green coating. This is why the Statue of Liberty appears green. This 151′1″ tall Statue of Liberty, stands on an 89 feet tall pedestal (made of concrete and granite) and 65 feet tall; eleven-point, star-shaped courtyard foundation.

The Statue of Liberty bears semblance to Libertas, an ancient Roman goddess of freedom from slavery and tyranny. However, the sculptor modeled the statue’s face after his mother’s. Lady Liberty’s face is more than 8 feet tall. 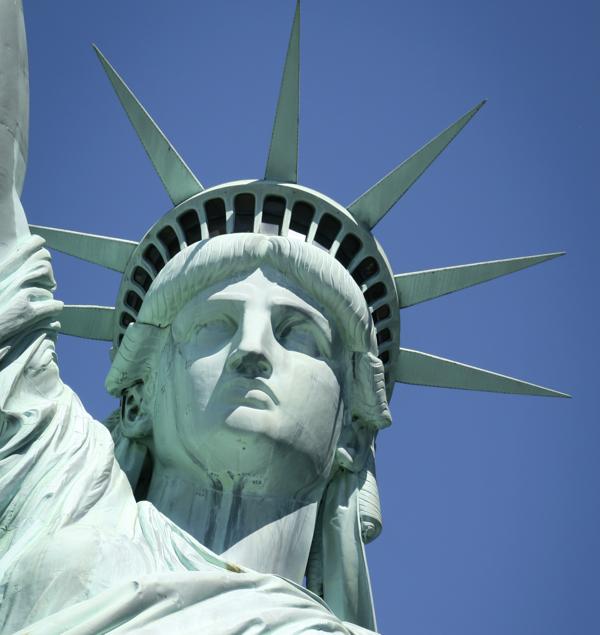 Her crown features seven spikes representing the seven continents and seven seas. The crown features an observation deck with 25 windows, with a capacity to accommodate 20 people at a time. To get to this observation room, one has to climb a 354-step winding staircase from the pedestal. 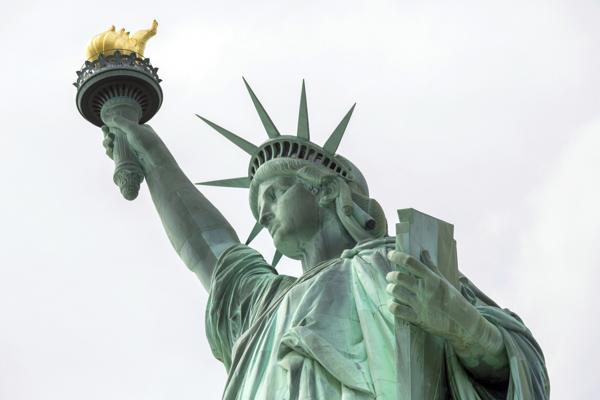 Lady Liberty’s highlight is the torch held in the right hand. The flame of the torch is coated with gold-leaf and represents enlightenment, affirming the fact why Lady Liberty is referred to as ‘Liberty Enlightening the World’. The gold-leaf coating reflects the Sun’s rays during the day and after dusk, the 16 floodlights in the torch, light it up.

A forty feet ladder leads to the torch, however, after the “Black Tom” explosion of 1916, it is no longer accessible to the public. In 1986, Lady Liberty underwent renovation, wherein she received a new torch because the old one was worn out. The original torch is now displayed in the Statue of Liberty museum. 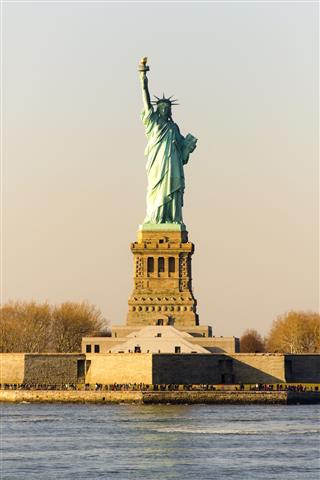 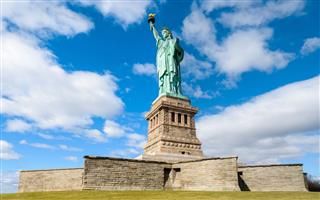 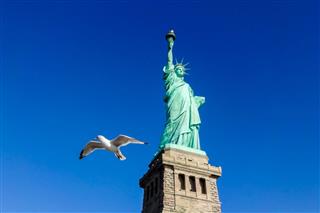 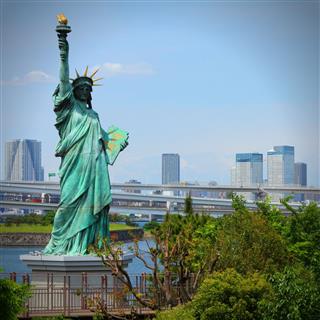 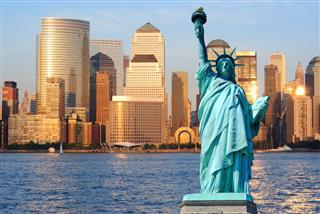 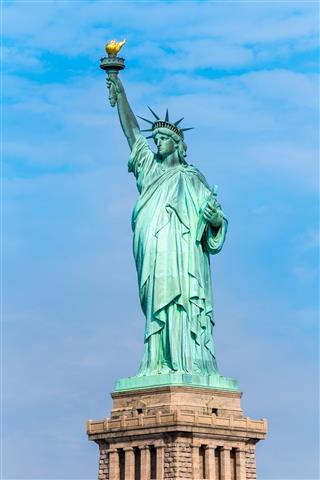